As protests and calls for racial justice consumed Washington, D.C., local artist and educator Keyonna Jones received a call from a friend about a secret city project.

“One of the artists that was part of the project called me Thursday at six and said there was this kind of secret project that the city was doing. They had a budget — which sent my spine senses tingling — and then she thought I would be perfect for the job,” Jones said in an interview with The Hoya.

City officials had enlisted local artists and volunteers to paint a mural to celebrate the Black Lives Matter movement.

Work on the project commenced before the crack of dawn as Jones and other volunteers coated the asphalt with bright yellow paint for eight hours straight.

“We got on the call at 8, which was where it was laid out — what we were gonna be doing, how grand-scale it was gonna be and that we needed to be there at 3 o’clock the following morning,” Jones said. “So we got there around 3:30 a.m. and we finished probably close to 11 o’clock.”

The final product — “Black Lives Matter” painted in street-wide yellow letters just blocks from the White House — has become one of the defining images of international protests against racial injustice sparked by the police murder of George Floyd in late May.

The artwork, commissioned by D.C. Mayor Muriel Bowser (D), was unveiled the morning of June 5. The mural runs down Black Lives Matter Plaza, a stretch of road leading to the White House and Lafayette Park.

Black Lives Matter Plaza, the recently renamed portion of 16th Street NW, has been a flashpoint of ongoing demonstrations against racial injustice in the District. The street captured the national spotlight after President Donald Trump ordered police forces to forcibly remove protesters from the area surrounding the White House and St. John’s Episcopal Church for a photo-op June 1. Protesters were shot with rubber bullets, tear-gassed and beaten as police and military personnel cleared a path for the president.

Soon after the incident, city officials and local activists worked to immortalize the stretch of road as a space commemorating the fight against racism in the United States. The banner-like mural extends across approximately 2½ blocks, and its width spans a two-lane street, making it an eye-catching installment even for aerial cameras — the mural can be seen from space. Taking just under nine consecutive hours to complete, volunteers ranging from professional artists to passersby helped bring the monumental project to life.

Jones, a D.C. native, was a leading artist behind the “Black Lives Matter” mural. After finishing a master’s in science management at the University of Maryland, Jones established the Congress Heights Art and Culture Center, an arts and education nonprofit dedicated to sharing and exploring art of the African diaspora.

However, the mural also received unexpected criticism, according to Jones.

“I definitely wasn’t expecting for people to call it performative or not think it was enough,” Jones said.

Some demonstrators spray-painted messages on the mural, criticizing it for shallow symbolism and calling for policy changes. On the most intense day of protests and only a day after Bowser unveiled the massive “Black Lives Matter” mural, activists painted “Defund The Police” beside the original artwork.

The trend of protest-inspired street art spread to the Georgetown neighborhood, where colorful anti-racist and “Black Lives Matter” murals have been painted on boarded-up storefronts and alleyways.

“We reached out to a couple of local artists’ collectives: the Capital Artists Collective, a D.C.-based collective, and the Congress Heights Arts and Cultural Center,” Shank said in an interview with The Hoya. “We wanted to try and keep it hyper-local but also open the opportunity for artists throughout D.C., and one of the artists was actually from Baltimore.”

“I don’t think any of us went down there and were rolling paintbrushes like, ‘Okay, when we’ve finished this mural, we are done and racism has ended.’ Like, that’s not it,” Jones said. “I think that’s the beauty of art: It’s a catalyst for change, and it speaks to the phases of healing.”

Valentino Will Partner With Nick Knight on an Immersive Couture Experience

The Duchess of Cambridge is known for re-wearing pieces that she’s owned for years—a practice that is inherently sustainable, as it both reduces the number of clothes you buy and prevents the garments from ending up in landfill. Recently though, the royal—like her sister-in-law, the Duchess of Sussex—has been wearing more eco-friendly and ethical labels, including Faithfull the Brand and Beulah London.

Considering the impact the Duchess’s fashion choices have across the world (the so-called ‘Kate effect’ has led to searches for particular items rising by an average of 86 per cent during lockdown), it’s only a good thing that she’s throwing her support behind designers promoting sustainable practices. Here, we round up eight brands the Duchess has been championing.

Catherine, Duchess of Cambridge during a visit to The Nook in Framlingham Earl, Norfolk, United Kingdom, June 2020.

Founded by designers Sarah-Jane Abrahams and Helle Them-Enger in 2012, Bali-based label Faithfull the Brand’s pieces are an antidote to mass consumerism, with all their pieces handmade, hand-dyed and hand-printed by local artisans in Indonesia. The Duchess wore the brand’s Marie-Louise midi dress during a visit to East Anglia’s Children’s Hospice in Norfolk in June, leading to it instantly selling out online.

Fashion editor favourite Raey also got the Duchess’s seal of approval in May, after the royal wore a yellow printed dress by the brand for a television appearance. Launched in 2015, MatchesFashion’s in-house label, which is best known for its minimal designs, focuses on using materials with low environmental impact, as well as working with artisans and craftspeople to produce its garments.

Parisian brand Sézane—whose celebrity supporters include Bella Hadid and Irina Shayk—has also caught the eye of the Duchess recently, with the royal wearing a cream jumper by the brand during a visit to a London nursery in January. As well as being a go-to for French-style staples, the label has also laid out a series of detailed environmental commitments, including a target of using 80 per cent eco-friendly materials by 2021.

A long-time fan of Stella McCartney, the Duchess most recently re-wore a blue shift dress by the designer—first seen in 2012—to launch her new photography competition, Hold Still, in June. With McCartney being well known for her eco credentials, it’s no surprise that both the Duchess of Cambridge and the Duchess of Sussex (who enlisted the designer to create her evening wedding dress in 2019) are among her high-profile clients.

Catherine, Duchess of Cambridge visits Queen Elizabeth Hospital in King’s Lynn as part of the NHS birthday celebrations on July 2020.

Known for her desire to support charitable causes, it’s clear why British brand Beulah London is another of the Duchess’s favourites. The label, founded by Natasha Rufus Isaacs and Lavinia Brennan in 2009, aims to create employment for previously trafficked women, with 10 per cent of profits going to the Impact Partners via the Beulah Trust, which works to eradicate modern-day slavery. The royal wore a navy floral dress by the label during a hospital visit in July, wearing a similar design in red for a video message in May.

For a sportier look, the Duchess favours skiwear brand Perfect Moment, wearing a red puffer jacket by the label (first seen during an outing to London’s Olympic Park in 2017) for a festive engagement in December 2019. Founded by professional skier and filmmaker Thierry Donard back in 1984, the brand uses eco-friendly fabrics made from recycled plastic bottles, while its down is 100 per cent natural and recyclable.

The Duchess debuted a new personalised pendant necklace during a visit to Wales in January, featuring the initials of her children: George, Charlotte and Louis. Its origin? Responsible jewellery brand Daniella Draper, which makes all its products in England and uses recycled gold and silver. The necklace isn’t the only piece by the designer owned by the royal: the Duchess also recently wore a pair of hoop earrings by the brand during a Zoom call with charity Action on Addiction.

Catherine, The Duchess of Cambridge visits the RHS Chelsea Flower Show, May 2019.

Ethical jewellery brand Monica Vinader is another regular feature of the Duchess’s jewellery box, with Kate first wearing a pair of green onyx earrings by the designer back in 2016. As well as offering affordable pieces, the brand is committed to the responsible sourcing of all its materials, as well as offering a lifetime repair service to ensure the longevity of its pieces. The jewellery label also works with charities including Women for Women International to ensure it has a positive social impact.

6 of Kate Middleton’s sold-out Zoom looks that you can recreate with pieces from Zara, H&M and more 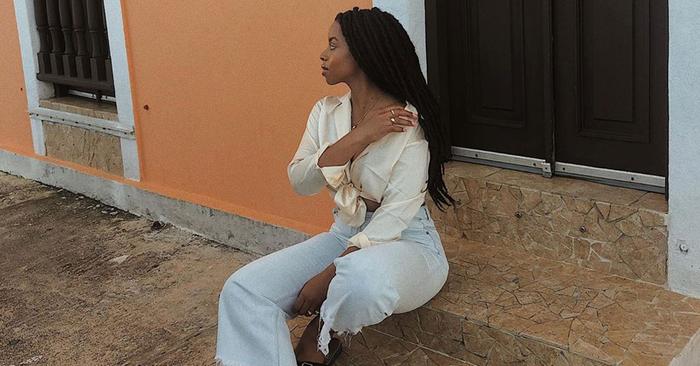 While timeless in nature, the classic button-down shirt has also been trending this season amongst the fashion crowd. Sure, an oxford blouse could be considered “plain” in theory, but its polished silhouette is what makes it an ideal piece in some of the chicest, effortless ‘fits. And as we’ve been spotting on the ‘gram recently, there’s one shirting trend that can enhance those button-down looks even more.

Yep, talking about the tie-front shirting vibe here. Whether purchased as an intentional tie-front top or tied on its own from a regular oversized shirt, the addition of this easy piece will take any simple ensemble to the next level as it will bring extra dimension to a look.

To showcase what we mean, we rounded up a bit of visual inspiration featuring the top. And if you’re shopping at the moment, we’re also showcasing how to master each look as well.

Underground guerrilla Bristol street stencil spray paint artist Banksy may be suffering from early-onset dementia, it has been revealed, due to inhaling too many paint aerosol fumes over the years. The legendary street artist, who paints gigantic political cartoons on buildings or sprays his views and witty comments wherever he likes, was reportedly admitted to a care home by his parents, who were fed up with him living at home and wanted to let out the spare room.

‘He’s got millions in his account, but still refuses to pay us a bit of rent so we can make ends meet,’ said Mr Banksy senior, a graffiti art remover for Bristol Council. ‘Now we’ve painted the walls white and got a lovely top-end mattress in for our first tenant, a nice young lady called Tracey Emin. Our only rules are: no vodka, wine, cigarettes, pissing, shitting, vomiting or used tampons in the bed, but, just to be on the safe side. we have fitted a mattress protector.’