Popular athletic apparel retailer Lululemon, known for its leggings and other workout gear, is holding its first major warehouse sale since 2017 due to the coronavirus putting a strain on business, according to a report by Business Insider.

The sale is online only, and new deals will appear each day through Monday.

Although you can snag Lululemon’s popular items like leggings starting at $49 and shorts starting at $29, the rare sale makes it clear just how much most of the retail industry is struggling.

Lululemon’s first-quarter earnings report shows that its net revenue dropped by 17% compared to 2019 as it was forced to temporarily shut its stores due to the pandemic.

Some of the noteworthy deals that are part of the sale:

There are currently 14 Lululemon stores in New Jersey and all have since reopened, except for the Jersey Garden Mills location in Elizabeth.

You can browse the entire Lululemon online sale here.

Coronavirus face masks for kids: Where to buy disposable or reusable styles online

Please subscribe now and support the local journalism YOU rely on and trust. 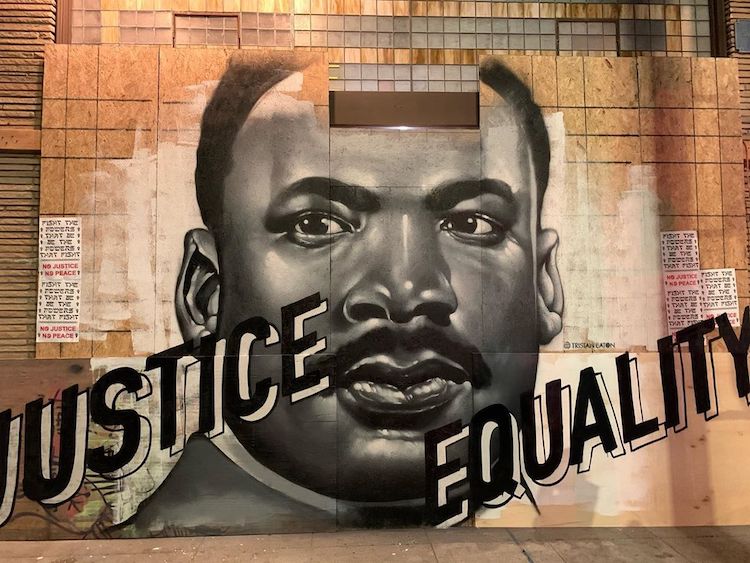 When the killing of George Floyd sparked protests throughout the world, street artist Tristan Eaton was there to show solidarity and support for the Black Lives Matter movement. He has his studio in the Highland Park neighborhood of Los Angeles and discovered that a march was headed to the area. Eaton also noticed that local business owners had boarded their windows as a precautionary measure, and he saw it as an opportunity to paint on the proverbial blank canvases. Eaton contacted Café de Leche with the offer to depict Martin Luther King Jr. on the plywood covering their shop.

Over the course of an afternoon, Eaton created a powerful portrait of Dr. King. Featuring a monochromatic rendering made using spray paint, the image also had the words “justice” and “equal” emblazoned across the composition. His artwork made an impact; during the anti-racist demonstrations in Highland Park, protestors stopped and knelt to honor Floyd.

Sadly, the mural of Dr. King did not last. One night, a woman rolled white paint onto his face and wrote anti-Black slurs onto the painting. Eaton, however, was undeterred. Upon finding out that the portrait had been defaced, he arrived shortly after and created another painting. This time, it was of Malcolm X. The smiling portrait, which now includes the words “no justice” and “no peace,” had another addition in the background: the names of Black people killed by police brutality written in a graffiti style by Korea from LTS Crew. The street art is still up and on view at the intersection of Avenue 50 and York boulevard.

We spoke with Eaton about creating these two murals as well as the role that public art plays in expressing our humanity. Scroll down to read My Modern Met’s exclusive interview with him, which has been edited for clarity and condensed for length. 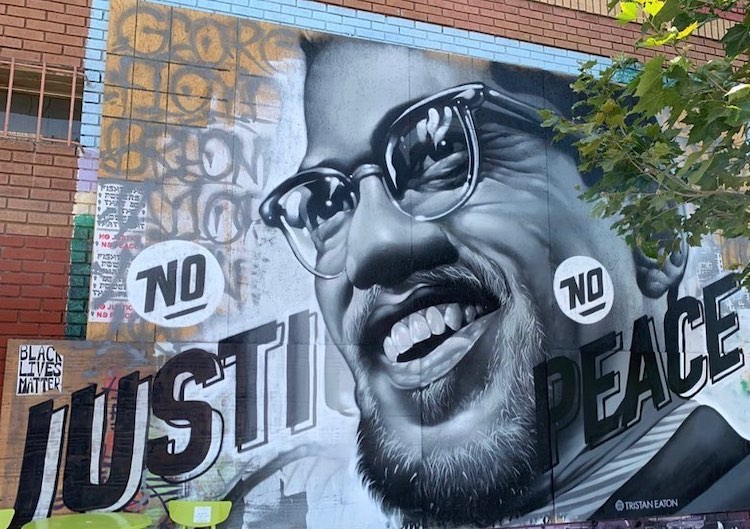 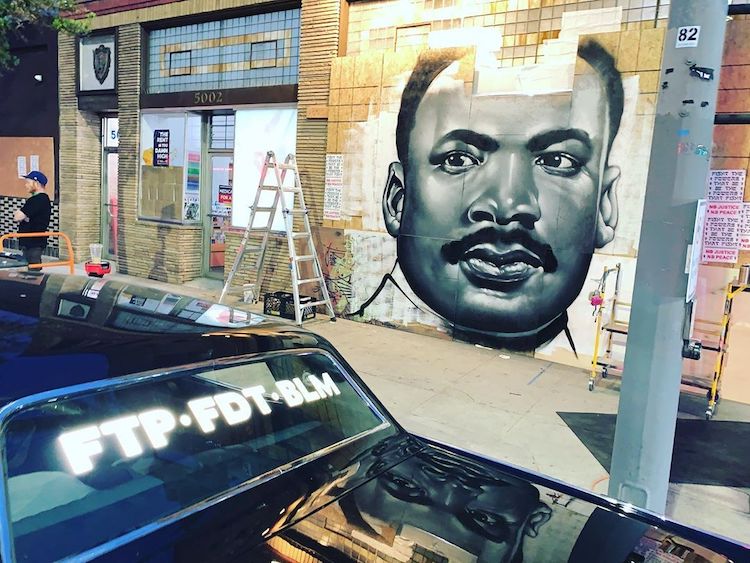 How did your mural of Martin Luther King Jr. come about?

The reason I painted it was because at the beginning of all the Black Lives Matter protests that were happening—when things were pretty hot—there were a lot of upsetters who were joining the protests and looting and all kinds of violent stuff that was changing the tone and tenor of the entire anti-racist demonstrations. And as the majority of LA shops boarded up their storefronts, I heard that Highland Park, where my studio is, had protest plans. I thought, “Okay, we need to do something larger, visually, to show solidarity.” I went next door and asked the coffee shop (Café de Leche) if they wanted me to paint their shutters. And they were like, “Okay, cool. Go for it.”

So, I literally painted it in one day. I think half a day, even. I started around 2 PM and painted Martin Luther King. And I’m still happy I did because when the protest came, the entire march was like, I don’t know, a few thousand people. It was a really good turnout and everyone stopped at the corner right in front of my mural and did a moment of silence and took a knee. It was a great, beautiful moment. 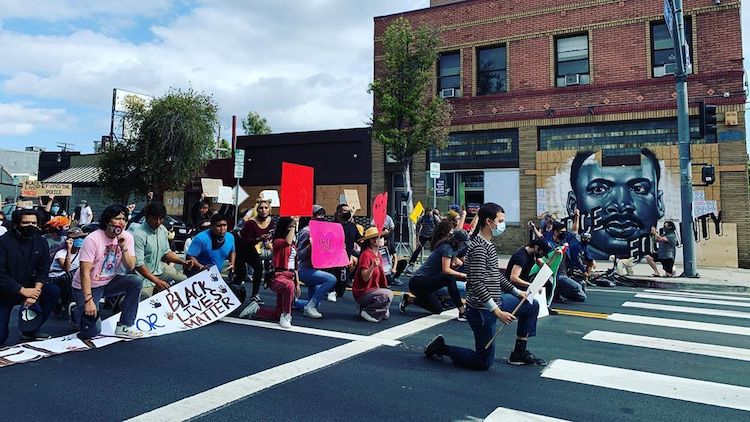 With the mural vandalized, how did you decide to depict Malcolm X?

I was up mega early at home watching the James Baldwin documentary I Am Not Your Negro and while watching it (on a projector screen in my house), there’s a section where he talks about Malcolm X. And as it came to that section, I paused it and took a photo because there’s a portrait of him that I hadn’t seen before, which is of him smiling.

About 45 minutes later, I got the message that the MLK mural had been defaced. I told the owner of the building, “Okay, I’ll be down there in half an hour.” So I took the photo from the projector screen, printed it out, drove down to my studio, got my paint, and I was repainting it by noon. And I knew I wanted to paint Malcolm X over it because there’s kind of a theme, which is a peaceful protest, you know, wanting change. People are tired of waiting for change, so now it’s time to demand it. And, I felt like following up MLK with Malcolm X fits that tone. 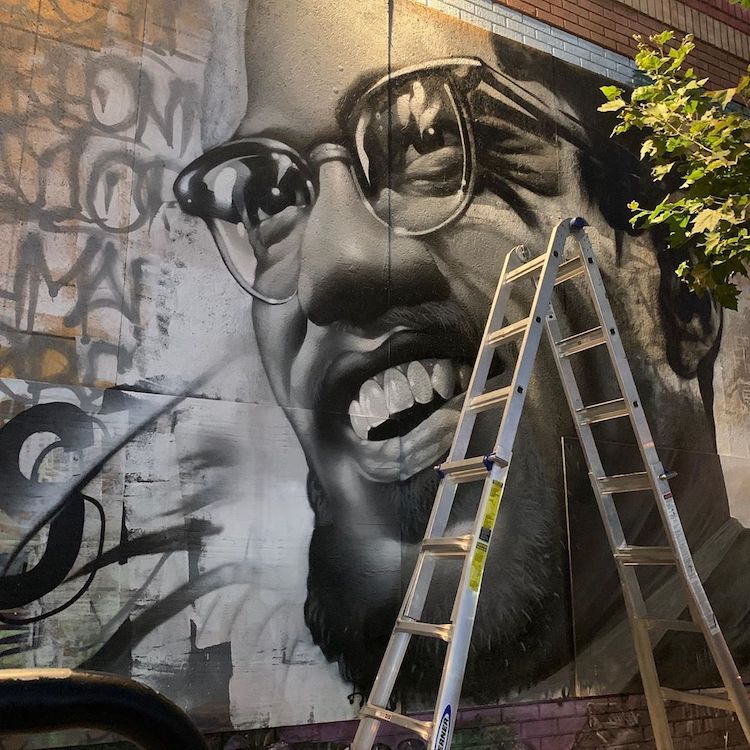 You had some additional help with the Malcolm X mural, correct?

I painted the portrait, and there’s an artist that works for me who’s a graffiti writer named Korea from the LTS crew. I had him paint the names of victims of police brutality in the background. 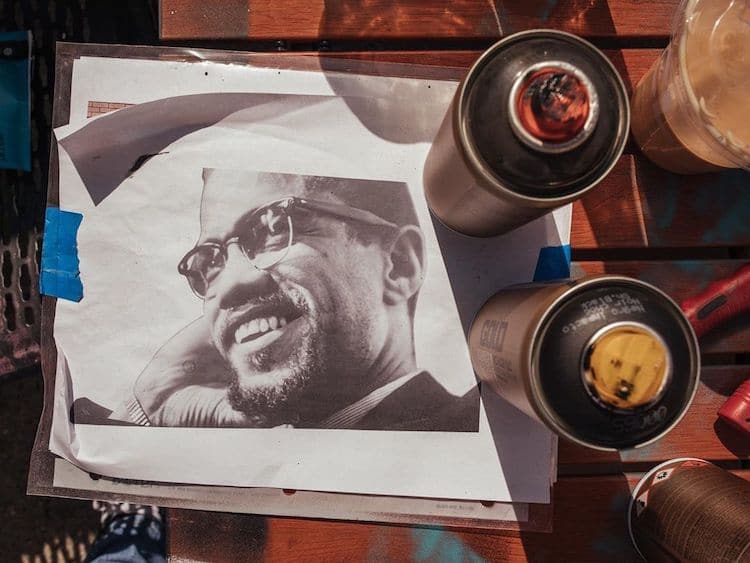 What role do murals, and street art in general, play in our society?

There’s a huge spectrum when it comes to public art, street art, etc. You have everything from gigantic sculptures and gigantic public mural works to the wild chaos of illegal graffiti and illegal street art. And, you know, all of them are sparks of life and humanity in a landscape of brick and cement.

I think that at its core, public art just reminds people that we’re alive and that we’re human and creative. When we live in these city landscapes that are just so bleak and boring and depressing, it’s a lifesaver sometimes to see an explosion of color and to remind us that the world is made by hands. You can change the world in a simple way just by painting it.

I think that fact is inspiring, but then furthermore, public art can tell stories, and stories are how we identify with each other and connect to each other. That’s important because public art can also memorialize historic moments and historic people. And that’s important for us too, for our identity and for our pride in who we are, and the symbolism of what kind of people we want to be. 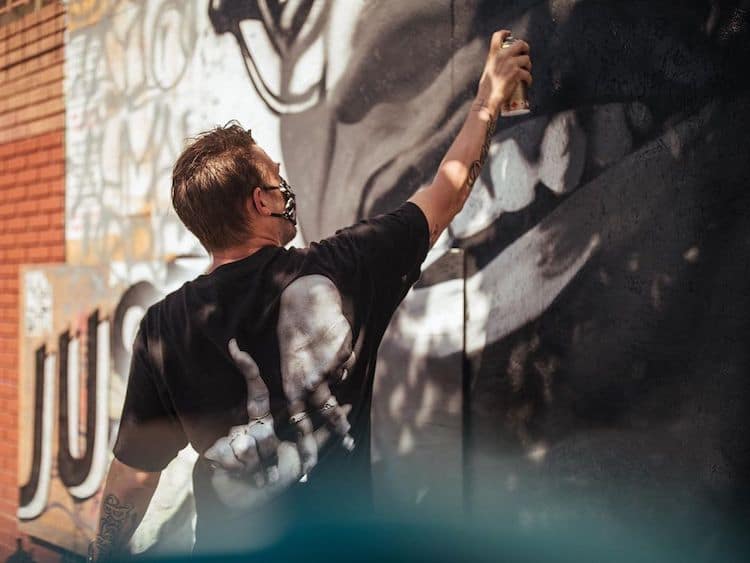 (continued) When we erect a statue of a Confederate soldier or Confederate slave owner, that has power. It shows how important and powerful public art can be—a lot of those statutes weren’t erected in the 1800s. They were erected in the 1940s through the 1970s and as a direct response to voting rights and civil rights. These racists can say, “This is how we think it should be now.” I think it’s time for a sea change.

I’m happy to see the Confederate flag coming off the Mississippi flag. I’m happy to see all of these things change because they’re symbols of a racist slave-owning nation. And, you know, it’s time for a reckoning for that, and visual symbolism is a lot of how we move forward in a new world after changes have happened.

A lot of artists like me have a responsibility to contribute to that fabric and to be creating imagery that supports those ideas. There are things that you want to say that you don’t have the words for. And that’s why we paint. 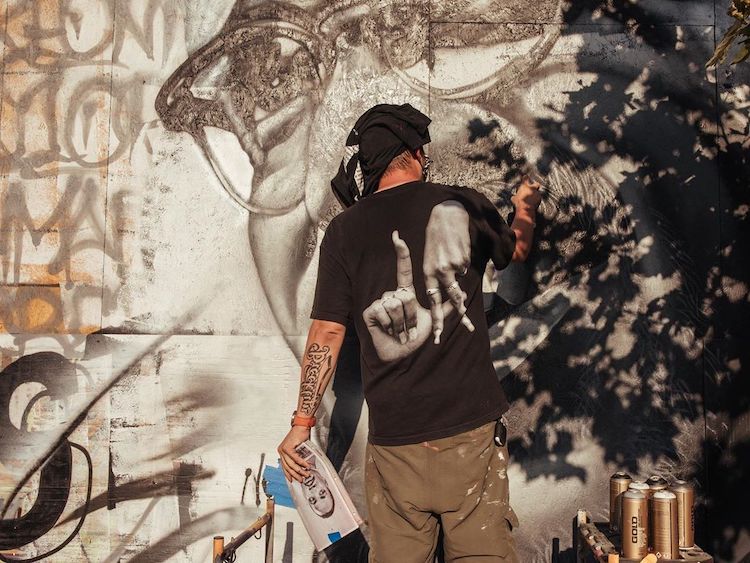 Has anything changed for you now that the mural has gone up?

I’ve had Black artists reach out to me, asking me how to get on or how to rise within this world of public art and street art. And the truth is, a lot of the people that organize mural projects, mural festivals, etc., are desperate and hungry for more diversity, more women, or people of color in this field. 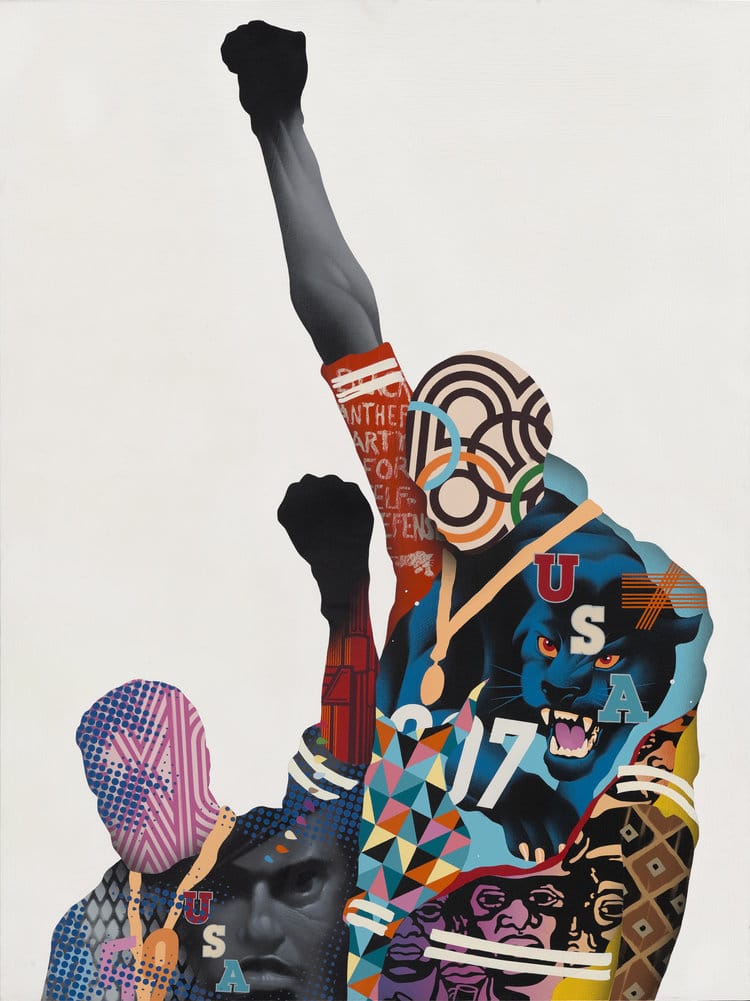 What else have you been up to? Anything exciting on the horizon?

I did a project to raise money for the Museum of Graffiti in Miami. It’s run by Alan Kat and Mayer, who are both artists of color who started the museum. Years ago, I did a painting about the Black Panthers that touches on the larger history of protests. The idea was to remind people that protesting is in our blood. It’s nothing new. This is how big change happens. I used that painting to make a print release to raise money for the Museum of Graffiti, and it did really great. We raised $18,000 for them.

I’m organizing a mural right now in New York. I have some walls that I’ve been running for about 10 years in Williamsburg that I’m using right now to feature three Black artists. 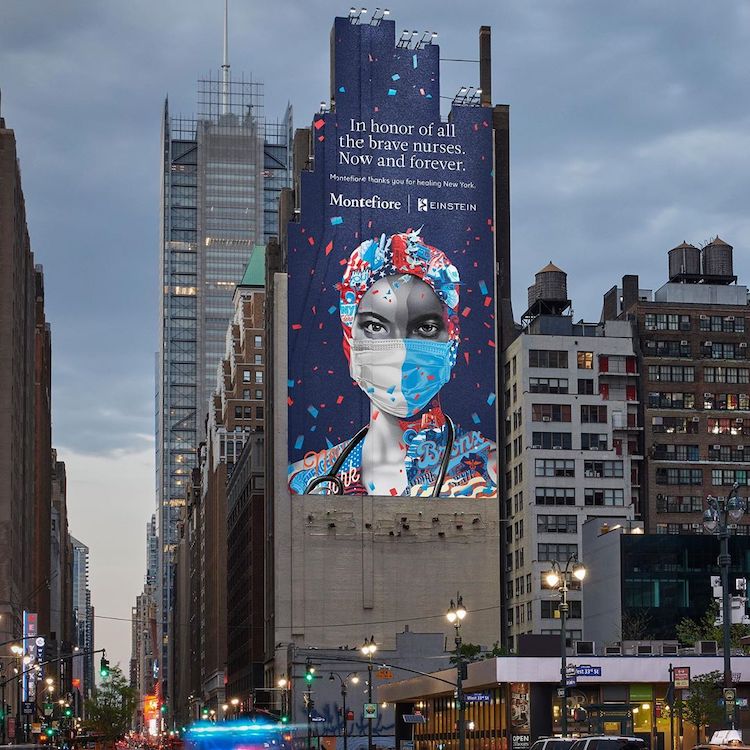 (continued) I’ve also been creating artwork for Montefiore, which is the main hospital in the Bronx that was at the epicenter of the New York COVID-19 outbreak. The work that I’ve made for them is on a 13-story-tall mural by Madison Square Garden. It was a really cool project to do, to show positive support for all the nurses in New York and first responders.

My team and I are very fortunate. We’ve lost a lot of projects, of course, but we’ve gained a lot of other special ones at the same time.