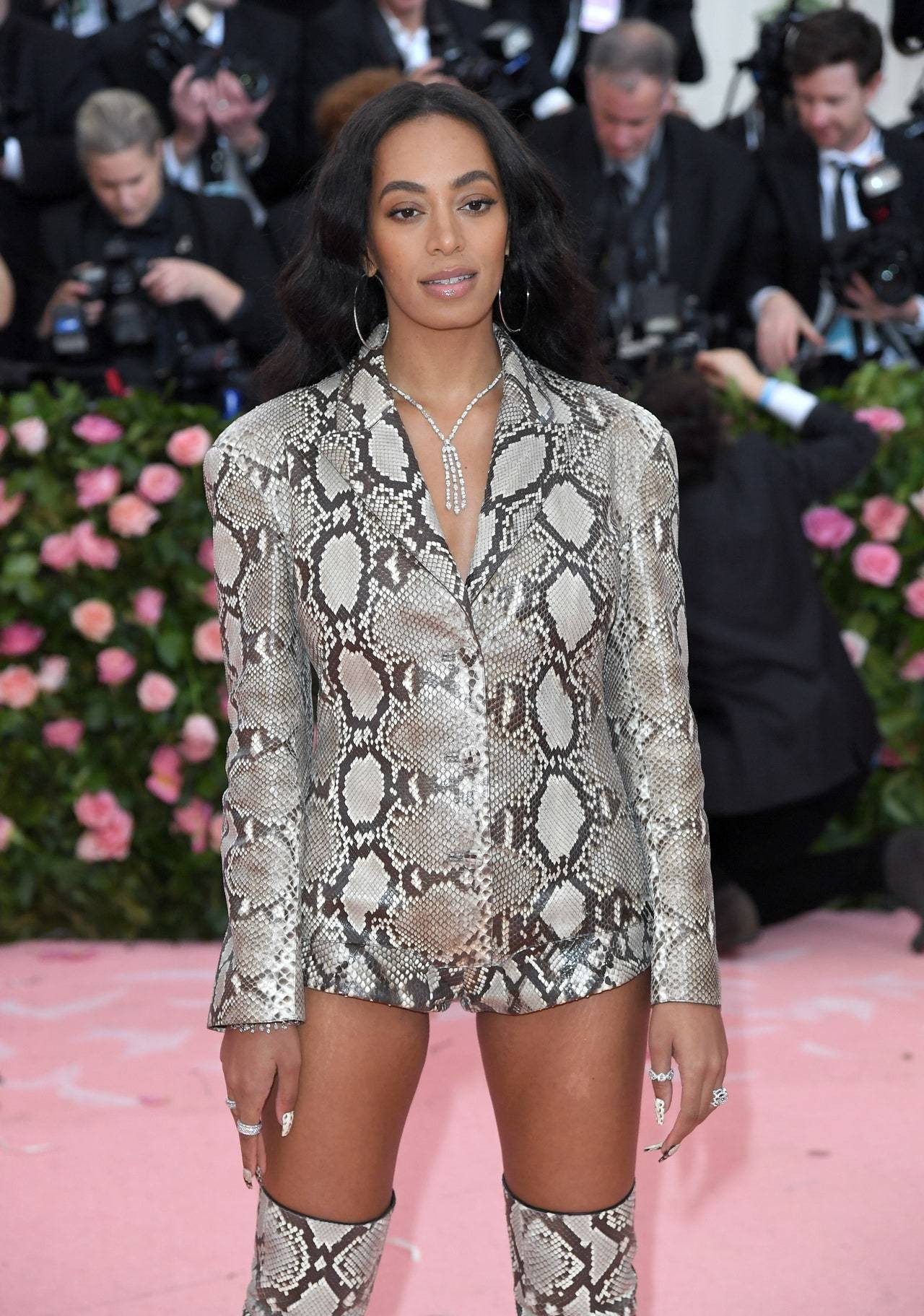 With colleges closed and graduation ceremonies canceled, the class of 2020 has seen the last few months of their education disrupted in ways that no one could have imagined. Rather than go out with a bang, their academic careers are coming to a sputtering end. For graduating students at Parsons School of Fashion however, some light at the end of the tunnel: Today, the school announced they would be partnering with Solange Knowles and Saint Heron on Here and Now, an immersive virtual festival designed to celebrate the thesis and capstone work of final-year students.

“When we realized that we weren’t going to be able to hold our festival in the way we typically would, we started to brainstorm around what we could do, not just for the students, but also for the fashion industry and the creative community,” said Jason Kass, interim dean of fashion at Parsons School of Design. “Solange and the team at Saint Heron instantly came to mind.”

The singer has close ties with the school and was honored at Parsons annual gala back in 2018. In classic Solange style, she showed up to the benefit dressed in a daring deconstructed jumpsuit by then-Parsons student Shanel Campbell. That eye for emerging fashion talent has been honed over several years. The canary yellow confection she wore to the Met in 2016 for instance, was created by David LaPort, a little-known Ducth designer she stumbled across on Instagram.

More recently, Solange has expanded her creative vision beyond the world of style with exquisitely realized performances that push the boundaries of fashion, music, and art—her appearance in Grace Wales Bonner’s “Devotional Sounds” project last summer is a prime example. As such, Solange and her creative collective are well positioned to bring a radical new perspective to the idea of an online showcase. “As the world confronts the challenges of our current global crisis, fashion and design communities must embrace new ways to pause, evolve, and adapt,” read the statement issued by Saint Heron. “These challenges open up opportunities to expand growth in our creativity and innovation.”

As of now, full details of the festival have yet to be released. So far the artist Jacobly Satterwhite, a one-time Saint Heron collaborator, has been confirmed to create a 3-D installation or “virtual environment” called Meronymy, which will host the final projects of over 300 graduating students. What was usually a weekend-long round of fashion events in the month of May, will now take place over the course of a few months, with a programme of online lectures, special performances, films screenings, design workshops, and mentorship sessions to kick off in July.

“In these past weeks, so much of the focus has been on what has been taken away or lost. Right now feels like a moment to come together around that,” says Kass. “We’re not seeing this as a consolation, but rather a new way of celebrating creativity.”

For many brands, 2020 will be the year they “pulled up” to stop racial injustice, both in the fashion industry and beyond — but not for Prabal Gurung. Since founding his namesake brand in 2009, Gurung has been constantly fighting to make the fashion industry a more equal place at every turn, which is now underscored by the revival of a relevant past project. Announced on Jun. 3, Prabal Gurung’s “Stronger In Colour” collection is getting a second life, continuing the commitment to diversity and inclusion that’s been the brand’s lifeblood from the start, selling 100% charitable tees and hoodies for a noble cause.

Available on its site right now, shoppers can choose from two unisex styles, in two shades — a basic tee ($95), or a basic hoodie ($175), in either black or white. In multicolored typeface, each reads “STRONGER IN COLOUR,” echoing the longtime ethos of the New York-based womenswear brand. To sweeten the deal, 100% of net proceeds will be donated to The Bail Project, which is presently focused on combatting the mass incarceration disproportionately affecting the Black community.

Right now, there’s a disparity between brands who have been posting fervently in accordance with the present moment, and those who were slower to respond. The Nepalese-American designer has, alternatively, been using his near-750,000 following to get messages out around the clock, spread powerful footage of protests and messages of hope. Still, he believes there’s more to be done. “We have posted, donated, signed petitions, marched in protests, spoken on panels, and shared important resources – but this didn’t feel like enough. This is just one additional step, and we know there is still more we can do,” shared Gurung in an Instagram post this week.

Available now through Jun. 15, shoppers can purchase the tops exclusively on Prabal Gurung’s site. To participate in the movement and support the brand’s initiative, browse the styles ahead — and, you can shop rest assured that your full contribution is paid forward. And, as the fight continues, some words of encouragement from Gurung’s Instagram: “…as we walk through the streets alongside protests, and unified chants for justice are heard around the world, it feels as though we are on the precipice of true change as this movement barrels forward.”

Fear of God has pulled together some of the best names in streetwear and fashion for a T-shirt honoring George Floyd. Off-White, Pyer Moss, Union, Noah, Awake, Just Don, Denim Tears, and Melody Ehsani all lend their names to the tee, of which proceeds will go to the Gianna Floyd Fund.

The late Floyd’s initials appear on the front of the shirt, while all nine brand logos appear on the back. Available in black or white, the shirt will sell exclusively through Fear of God’s Instagram page for $100. It goes live at 9 a.m. PST Friday, June 5.

A limited run — While streetwear consumers often call for fundraising T-shirts to be made available for pre-order to maximize proceeds, COVID-19 has rendered that more difficult. We’ve seen it already with Supreme and Noah’s coronavirus relief tees, and that’s the case here as well. Jerry Lorenzo, Fear of God’s founder and designer, said in an Instagram comment that the T-shirts are “limited to the fabric availability we have.”

Streetwear at its best — At its roots, and too often forgotten, streetwear is about community. And you can’t talk about the culture surrounding it without acknowledging the contributions and support from the black community. That makes it encouraging, but not at all surprising to see so many brands step up to raise funds to organizations tied to Black Lives Matter, as well as the families of victims.

With T-shirts quick and easy to produce, several brands have produced their own as fundraisers, including Brain Dead and Blood Orange, Online Ceramics, Andrew, and Advisory Board Crystals. In addition to the Fear of God collaboration, Denim Tears also has its own tee with proceeds going to the Know Your Rights Camp.

Banana Republic Donates $20M of Clothes to Americans in Need

Over the past few months, we’ve spotlighted fashion businesses stepping up and taking action, whether it’s to help support Americans affected by the COVID-19 crisis or to stand behind the Black community with donations, acknowledging the racially unjust murder of George Floyd and the larger conversation surrounding Black Lives Matter. Brands with a large platform can and should acknowledge voices that are struggling in America, and Banana Republic — notably a part of parent company Gap Inc. — is striving to make a difference. BR teamed up with Delivering Good to donate more than $20 million of new clothing to those in need in order to help America get back to work. It’s a project they’re calling “Will Work For a Better Republic,” and it comes after months of actionable Instagram posts the brand has put up, all of which are meant to encourage positive thinking.

“By supporting Delivering Good [an organization that helps kids and families through tragedies], Banana Republic is helping men and women across the US, including those facing poverty, homelessness, and job loss. Among our network of more than 700 community partners, we will focus this donation on nonprofits with workforce training and re-entry programs and markets that have been especially affected by the current crises. This donation will have such a positive impact on men, women and disadvantaged young adults,” said Delivering Good President and CEO Lisa Gurwitch.

In effort to promote equality, Banana Republic has also come together with Gap Inc. brands Athleta, Gap, and Old Navy to donate $250,000 to the National Association For the Advancement of Colored People and EmbraceRace. Previously, Gap Inc. donated $1M to support underserved families in the midst of the COVID-19 crisis, posting the news on Instagram on March 27. Banana Republic also came out with a reusable cotton face mask for customers to purchase, committing to a donation of $10 to Feeding America’s COVID-19 Response Fund for every mask sold. Scroll down to read about these initiatives directly from Banana Republic’s feed.

Banana Republic Donates $20M of Clothes to Americans in Need